Recy Taylor Gets Alabama Apology for Gang-Rape, Waits on City of Abbeville 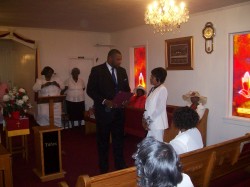 Sunday, 91-year-old Recy Taylor went to church in Abbeville, Alabama. Now a Florida resident, she made the trip to her old hometown for a special purpose: Taylor was finally receiving an apology from the State of Alabama for its “morally abhorrent and repugnant” conduct in response to her 1944 gang-rape.

The group of white men who admitted to the assault were never brought to trial, while Taylor and her family suffered threats and slander from law enforcement engaged in covering up the crime. Not even the concerted efforts of Rosa Parks and the NAACP could overturn the racist structure of the time to bring justice to this young Black woman. The long-overdue apology came after nearly 20,000 Change.org members signed a petition from Taylor’s youngest brother, Robert Corbitt, demanding an apology from the City of Abbeville and State of Alabama. Having won this amazing state level victory, Corbitt’s campaign now turns its focus to the city.

END_OF_DOCUMENT_TOKEN_TO_BE_REPLACED

Comments Off on Recy Taylor Gets Alabama Apology for Gang-Rape, Waits on City of Abbeville