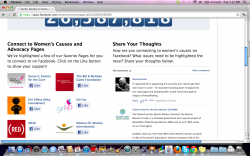 Facebook recently launched a “Women Connect” app, calling it “an online platform for organizations and causes to connect and share information with supporters about issues of gender equality and women’s empowerment.” Apparently, it’s a part of Facebook’s “Diversity campaign.”

Taking action to further gender justice is admirable, but some people see Facebook’s internal actions as out of step with this stated mission. The top comment to greet me on the Women Connect page, ranked up through users hitting the “Like” button, reads: “I’m glad that FB is supporting this but they also need to get their own house in order – for example by taking down misogynist & pro-rape pages and dropping their stupid censorship against images of breastfeeding.”

The almost 200,000 people who signed the Change.org petition demanding that Facebook remove pages promoting sexual violence and violence against women would most likely agree. As would the thousands of Change.org members telling Facebook to leave breastfeeding pictures alone.

In November, Facebook took some action after a #notfunnyfacebook Day of Action on Twitter denounced their excuse for pro-rape pages: “what one person finds offensive another can find entertaining – just as telling a rude joke won’t get you thrown out of your local pub, it won’t get you thrown off Facebook.” A number of pro-violence pages were removed, but Facebook still missed the point, permitting the hate content to remain live if the tag [Humor] or [Satire] was simply added in front of the page title. Facebook users can report content as abusive internally, however when the policy is to protect rape apologism, that won’t get rid of the pages.

Under this guise, a number of Facebook pages along the lines of “It’s not rape, it’s surprise sex,” “It’s not rape if she’s wearing skinny jeans,” “Kicking Sluts in the Vagina,” and “Riding your girlfriend softly so she doesn’t wake up” continue to exist. Meanwhile, many of the “surprise sex” and “sluts” pages appear without even this ineffectual tagging process, along with other gems such as “The awkward moment a slut is not DTF but you fuck her anyway” (DTF means “down to fuck” … as in, she didn’t consent so you raped her). Women’s Views on News’ (WVoN), one of the major partners in the #notfunnyfacebook campaign, has listed many of these on its “Offensive Pages List” for months, yet Facebook has failed to head their call to take them down.

Facebook representatives attempted to explain that the Change.org members signing the petition just didn’t understand their terms policy — which states clearly, “You will not post content that: is hateful, threatening, or pornographic; incites violence; or contains nudity or graphic or gratuitous violence.” People just aren’t getting the joke.

While Facebook takes down pictures of mothers breastfeeding their children, a natural act permitted in public, it allows misogynist users free reign to advocate violence against women by adding a meaningless humor tag — and in many cases they don’t even need to do that. Even without WVoN’s handy list, it’s a simple matter to find a slew of pages advocating violence against women, without any claim of humor. If Facebook wants to help women connect and to promote “gender equality and women’s empowerment,” the problem starts at home. Cleaning out pro-rape, pro-violence against women pages, making Facebook feel like a safe space for female members and survivors — that’s within their power to do immediately to create global change for the better.

If you want to help send Facebook the message that rape just isn’t funny, you can sign the petition here. You can also go to the Women Connect page and leave your own comment letting Facebook know you appreciate the initiative, but you can’t give them full props until they’ve seriously addressed ending the hate and violent anti-women content on the site itself.

Comments Off on How Facebook Can Really Help Women Connect