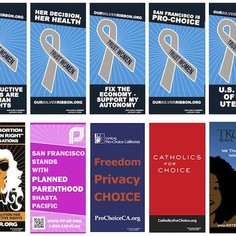 Victory! After 100 people signed the petition in just a few hours, the Department of Public Works quickly came to an agreement to allow the Walk for Choice to take place Friday and the banners to remain up until Saturday evening.

Anti-choicers rip down posters for a “Trust Women” event. Women’s rights advocates complain about the vandalism. What does the city do?

Threaten to tear down the rest of the banners.

Somer Loen, an organizer for the Bay Area Coalition for Our Reproductive Rights (BACORR), has launched a petition on Change.org calling on the San Francisco Department of Public Works (DPW) to “protect free speech for pro-choice organization.” In preparation for Trust Women Week (Jan. 20-27) the Silver Ribbon Campaign — of which BACORR is a member organization — put up banners to raise awareness, featuring slogans such as “Fix the Economy — Support My Autonomy” and “Reproductive Rights Are Human Rights.” Loen reports that they had a permit for the banners and an event on Jan. 20th, but the anti-choice Life Legal Defense Fund filed a “bogus” complaint with the city.

Loen and her fellow organizers were looking for a way to deal with vandals destroying their posters when the DPW shockingly invalidated their original permit for a Friday walk, refused to issue a new one requested for Sunday (so as to not overlap with a Friday Occupy event), and announced the remaining banners would be removed.

“Too many of the people who pass restrictive laws and service cuts aren’t affected by them,” Loen commented. “Women’s voices are the most important voices in any discussion regarding our rights. Our intention with these public displays of choice — from rallies to event banners to actions online —  is to empower everyone to publicly stand up for their rights.” Her petition says that the banners mark the “first time in history [that] San Francisco’s Market Street is advertising a pro-choice event” — yet this milestone has been marred by the DPW’s decision to give in to unjust anti-choice pressure.

The events of Trust Women Week will include a National Online March as well as events on the ground in San Francisco, including the currently contested Sunday walk and a rally on Saturday. The rally serves as a counter to the annual anti-choice Walk for Life and will celebrate the Board of Supervisors’ recent decision to pass truth-in-advertising legislation for crisis pregnancy centers. More than 800 San Francisco residents signed BACORR’s Change.org petition to regulate these anti-choice “fake clinics,” which have been found to falsely advertise reproductive health services and medical personnel to trick women inside, then serve up misinformation and manipulation rather than comprehensive medical care. The victorious campaign inspired petitions in other cities in California, New York, Florida, and elsewhere calling for similar legislation in their area.

Comments Off on San Francisco Threatens to Tear Down Pro-Choice Posters, Block Walk