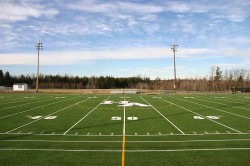 More than 35,000 people have joined a popular campaign on Change.org calling on the North Carolina Independent Schools Athletic Association (NCISAA) to allow girls to play football.

Members of the U.S. National Women’s Tackle Football Team launched the online petition on Change.org after they heard that starting linebacker Mina Johnson, a student at Southampton Academy in Virginia, was forced to sit on the sidelines when an opposing team threatened to forfeit rather than play against a girl. The opposing school was a member of the NCISAA, which prohibits girls from playing on boys’ varsity teams.

“The members of the U.S. national women’s team and I felt it extremely important to support Mina in her desire to play football,” said Adrienne Smith, who launched the campaign on Change.org on behalf of her teammates. “At one time or another, everyone on the U.S. national team has faced similar discrimination. We wanted to show unanimous support for Mina and her teammates, as well as her coach and community, by speaking as one voice through our petition.”

“Johnson and her peers don’t play football year after year on a whim, a dare, or as a hobby,” Roseanna Smith, another member of the U.S. Women’s National team, wrote in an article on Change.org. “No man or woman who has ever played the game at a high level would say it was any of those things. Football is a sport that teaches its players how to challenge themselves beyond mental and physical limitations, to never give up, and to find a way to reach a collective goal.”

The U.S. National Women’s Tackle Football Team is asking the NCISAA to adhere to Title IX regulations and change an outdated policy that prohibits girls from playing football. In addition to targeting the NCISAA, Adrienne and her teammates hope to expand opportunities for girls nationwide by challenging similar policies that keep girls like Mina off the field.

Tens of thousands of people have joined the campaign on Change.org, the world’s fastest-growing platform for social change, and Mina Johnson has given her personal support and hopes it “will help a lot of people change their minds about girls playing varsity football.” As a result of the campaign, the NCISAA’s Board of Directors plans to discuss the policy at its upcoming board meeting on Wednesday, January 18, at Mid Pines Inn and Golf Club in Southern Pines, North Carolina.