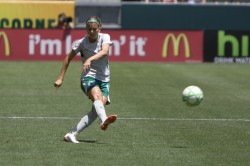 Gooooooaaaaaaallllllll! When the U.S. Soccer Federation announced on November 20 that Women’s Professional Soccer (WPS), the national league where World Cup stars like Hope Solo and Abby Wambach train up to rock it on the international field, risked losing sanctioning if it couldn’t add a sixth team in two weeks, prospects looked dim. But a game-saving goal come in the form of outcry from players and fans determined to save WPS — 50,000 of them.

Alex Sahlen, a player for the WPS Team the Western New York Flash, started a petition on Change.org asking U.S. Soccer to grant her beloved league a one-year waiver from the minimum team requirement. Her campaign attracted 48,000 signatures, while another petition started by Colleen Kelly, an ardent fan of the WPS Team the Philadelphia Independence, brought the number of supporters to just shy of 50,000. This week, U.S. Soccer announced that it will allow WPS to continue to develop and expand over the next year, recognizing that a sport with such devoted fans has an opportunity to thrive.

“I would like to thank all of the fans for their unwavering support throughout this difficult time and persisting with us to reach our ultimate goal of a 2012 WPS season,” said Alex Sahlen after hearing the good cheer about WPS. “The support has been amazing and really touching and humbling for many of us. We are looking forward to another successful WPS season and will look to build upon this season to keep women’s professional soccer around for many years to come.”

END_OF_DOCUMENT_TOKEN_TO_BE_REPLACED

Comments Off on Victory! Women’s Professional Soccer Survives With Help From 50,000 Fans