Victory: Belmont U Gives in to Protests Over Removal of Lesbian Coach 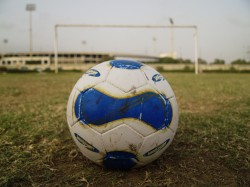 Early in December, I wrote about the Belmont University women’s soccer coach removed from her position after sharing the happy news with her players that she was expecting a baby — with the woman she loves.

Coach Lisa Howe’s players were furious and rallied in her defense, but the Belmont University administration, which has also refused to recognize a student LGBT group on campus as going against their religious tradition, didn’t budge. Well, that was 21,000 Change.org member emails and a lot of controversy ago. Michael Jones reports on Gay Rights that the Tennessee university has now announced that they will add sexual orientation to their non-discrimination policy. Goooooooooooal!

Though Belmont U President Bob Fisher has denied that Howe’s firing related to her sexual orientation, soccer players reported that their discussions with administrators sounded a little different. Team captain Sari Lin said she was told by Belmont’s Athletic Director that the school has “the ‘don’t ask, don’t tell’ policy and when she told us about the pregnancy, it violated that.” But even if the University had admitted that Howe’s sexual orientation got her the “resign or be fired” ultimatum, they wouldn’t have been violating any of their own policies.

Now, there’s an official written policy saying that discrimination borne of homophobia is not okay. And this decision makes Belmont University an example of tolerance to the over 200 Christian universities that accept anti-gay, -lesbian, and -bisexual discrimination, according to Rev. Cindi Love, director of the Christian gay rights group Soulforce.

In her response to the policy change, Howe commented: “Now begins the task for Belmont University leaders to make sure that acceptance of LGBT students and staff is not just a written policy but is also reflected in practice, attitude, and behavior.” All too true. The student LGBT group that has gone unrecognized for years also hopes that Belmont’s new tolerant stance will soon extend to them.

Comments Off on Victory: Belmont U Gives in to Protests Over Removal of Lesbian Coach