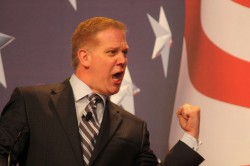 Seventy-eight-year-old Frances Piven, a City University of New York professor, has been receiving death threats. It all started when Glenn Beck decided to target her on his Fox News program for a paper she wrote in 1966, calling Piven an “enemy of the Constitution,” one of the “nine most dangerous people in the world,” who supports “terrorism” and wants to “intentionally collapse our economic system.”

“Somebody tell Frances I have 5000 roundas [sic] ready and I’ll give My life to take Our freedom back.” That’s one violent comment posted to a website Beck runs, The Blaze. “Maybe they should burst through the front door of this arrogant elitist and slit the hateful cow’s throat.” That’s another graphic example, among many. Although these direct threats were eventually removed from the website, other inflammatory rhetoric, such as charging her with treason, remains. As Piven told Media Matters: “It only takes one person who is a little deranged to take such rhetoric and make it real.” Yet Beck refuses to put a stop to these death threats by moderating his own language.

Piven’s 45-year-old proposal, written with her late husband, suggested that if the welfare rolls were overwhelmed it would force political action on improvement such as guaranteed income. Hardly seems like enough fodder for Beck’s 18-month-long rampage against her as attempting to bring down the economy and Constitution — but then again, when has Glenn Beck been known for making sense? Piven also recently wrote a piece for The Nation magazine suggesting that America’s unemployed begin staging mass protests to bring attention to their plight, an call for grassroots empowerment that was twisted by Beck into “inciting violence.”

Beck’s history of inflammatory rhetoric, hate speech, and wild conspiracy theories on his program has already prompted an ongoing campaign to ask advertisers to pull their commercials — and thus, their money — from his show. He’s been deemed responsible for three previous failed assassination attempts, and Media Matters has further pointed out that targets are often female due to significant misogyny by right-wing pundits.

The Center for Constitutional Rights and the American Sociological Society have written to Fox News’ chairman, Roger Ailes, asking him to stop the false accusations that are putting Prof. Piven’s life in danger. Fox News has refused to admit their role in putting Piven at risk of violence or to insist that Beck alter his language. In the wake of the shooting of Rep. Gabrielle Giffords, the hate- and paranoia-fueled rhetoric particularly concerns Piven, and the widow no longer feels safe staying in her home alone.

I’ve written before, in regards to the shooting of Dr. George Tiller by an anti-choice extremist, about the role that rhetoric by right-wing pundits can have in moving an individual toward acts of actual violence. For Fox News to act as though Beck’s comments do not create the potential for harm is irresponsible. Sign this petition from CREDO Action to tell Fox News to stop the harmful attacks on Frances Piven.