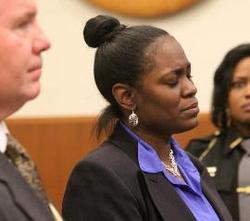 After hearing that Kelley Williams-Bolar, a single mom, was sentenced to jail for sending her kids to school in a safe neighborhood, Change.org member Caitlin Lord decided to take a stand on her behalf. And so far, over 6,000 people have stood with her.

Williams-Bolar received 10 days in jail and 3 years probation after found guilty of a felony crime: sending her children to school. As Carol Scott reports on the Education cause, the Akron, Ohio, mom registered her children as living with their grandfather because she feared for their safety, and wanted them to attend school in a more secure location. The school wasted $6,000 to bring the case to trial, hiring a private investigator to spy on and videotape Williams-Bolar’s children to prove that they lived with her in a different district, although she maintains that they split their time between the two homes.

“I wanted to do whatever was within my power to ensure that this travesty of justice would not slip between the cracks of our fast-paced, 24-hour news cycle,” says Lord of her decision to start a Change.org petition asking Ohio Governor John Kasich and officials in Williams-Bolar’s case to reduce her sentence on appeal. “I am also a single mother, and can identify with Williams-Bolar’s desire to do everything and anything possible to ensure that her daughters were safe and receiving the quality education they deserved.”

As Cara points out on The Curvature, it’s also impossible to ignore the fact that Williams-Bolar “a black mother who has been jailed for sending her kids to a white school district.” She lives in a predominantly minority housing project, while Copley, where she sent her kids for school, is mostly lily-white and middle class. While the Copley school district screams about lost property taxes, the broader problem is that we’ve set up a fundamentally unequal education system in which it’s a crime to send your children to a school where you can trust that they will be safe. The judge wants her sentence to send a message of deterrence. How about a message about the deep-rooted injustice of our educational system?

Williams-Bolar is herself working toward getting a teacher’s license, but as a convicted felon, that will go down the drain and she will not be permitted to complete her degree. Should the crime of being a concerned mom really bar her from taking part in the education system? As a low-income single mother living in the housing projects, to crush her hopes for better employment seems much too harsh for the offense that was committed.

“When the punishment does not fit the crime, when those punished are disproportionately people of color and/or economically disadvantaged, when victimless crimes like Williams-Bolar’s are punished more severely than violent crimes such as rape, assault and domestic abuse, there is no way for me to feel truly safe or protected by our courts,” Lord comments further. “The fact that this petition has blown up so quickly and received so many signatures in such a small amount of time is evidence that I’m nowhere near alone in this belief.” In the course of my writing and publishing this update post alone, the number of signatures has gone up by almost 1,000.

The National Action Network is supporting Williams-Bolar’s case and accepting donations to defray her legal fees. If you want to stand with the over 6,000 Change.org members who have demanded a more just sentence for Williams-Bolar since yesterday, please sign the petition on her behalf.

Comments Off on Over 6000 Change.org Members Support Single Mom Jailed for Sending Kids to School