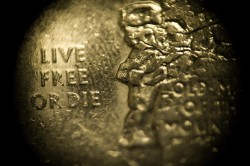 Up in New Hampshire where I attended college, the thermometer’s been dipping down below zero degrees. Yeah, that’s Fahrenheit. Gives me the shivers just thinking about it. But while I would consider this way below freezing weather bad news enough for the winter, there’s something else to be concerned about: Republican plans to ice abortion rights.

Republicans in the state legislature want to ban abortion for minors without parental notification — and they actually might “have a shot,” according to NARAL Pro-Choice New Hampshire Executive Director Pilar Olivo. Women’s eNews points out that the midterm elections put not just Republicans but men in the majority.

Currently, New Hampshire is living up to its motto, “Live Free or Die,” by not having any abortion restriction laws that control female bodies on the books. But Republicans want to take that freedom away. And there are concerns that this initial bill proposal is only the start of an agenda against women’s control of their bodies.

Parental notification or consent laws often get by after being framed as “parent rights” bills, or in the best interest of youth who can’t make decisions for themselves. However, a teenager who doesn’t voluntarily share the decision to have an abortion with her parents might have a good reason, such as having been physically or sexually abused by a family member, or religious extremists parents who might disown or harm the girl if they knew she was considering an abortion, or even for being sexually active.

It’s great if a teenager considering an abortion feels safe informing one or both parents and getting their advice and support, and this is often the case. Yet if this relationship doesn’t exist, a harsh blanket law that has no concern for individual situations is not a good solution.

Parental notification laws tend to delay the procedure, which increases in risk later in the pregnancy. Getting an exemption usually requires a teenager to prove abuse at home — not necessarily the easiest task, especially with the clock ticking for an already pregnant youth to access an abortion. However they’re framed, notification laws are meant to put up another barrier to keep reproductive rights from being exercised.

A similar parental notification law passed in 2003 was declared unconstitutional because the anti-choice legislators who passed it didn’t care enough to include any exception for emergency situations. Of course, Republicans have smartened up, so this time around they won’t be quite so callous, in order to avoid having their anti-choice work struck down. Disappointingly, Democratic Gov. John Lynch says he’s keeping his mind open about whether he’d sign this bill or not if it made it to his desk. He recently stood up for LGBT residents by making it crystal clear that any attempt to repeal same-sex marriage will get the veto axe, diverting the Republican focus to attacking women’s control of their bodies.

Republicans in New Hampshire have been trying to undermine reproductive rights for decades. Don’t let this be the year they succeed. Tell NH legislators not to pass the state’s first anti-abortion law.

Comments Off on New Hampshire: Steer Clear of Anti-Abortion Laws