How Did We Strip Away Women’s Reproductive Rights This Year? 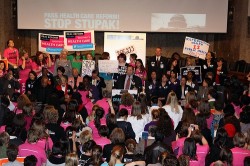 Year in and year out, legislators think of new and exciting ways to impose control over a woman’s body … or they just try, try again to pass the old and uncreative means of letting women know we were silly to consider our bodies our own. While we’re never particularly celebratory over these developments, 2010 has seemed like an especially bad year for reproductive rights. With most states done with their 2010 legislative session, the Center for Reproductive Rights (CRR) today released an overview of this round’s changes and what’s popular in violating a woman’s bodily integrity this year.

With President Barack Obama busy shoving health reform through Congress, it seems the only soundbite we heard as often as “death panels” was “government-funded abortion” (or “baby killer,” or some other such permutation). Anti-choicers won a victory with the Nelson Amendment, which imposed mandatory restrictions on abortion coverage while giving states the green light to make life even harder for women, should the mood take them. Arizona, Louisiana, Mississippi, Missouri, and Tennessee took them up on that offer with their own exchange bans, and Florida and Oklahoma would have followed if it weren’t for the woman-friendly pen of their governors. Never mind that organizations from the World Health Organization to the American Public Health Association tout what a vital element of health care abortion is.

Other winners on America’s Top Anti-Choice Legislation were laws requiring doctors to counsel women with scientifically unfounded information (also knows as lies to the more blunt of us), mandatory ultrasounds even for rape victims (because having your body violated once wasn’t enough), and parental notification laws that endanger abused girls. Attempts at personhood ballot initiatives that declare against both science and many people’s personal beliefs that life begins at conception have also been popular, but luckily these unconstitutional attempts to define all abortion as murder have failed to win over the voters.

For more information and a state-by-state breakdown of the worst offenders, check out CRR’s website.

Comments Off on How Did We Strip Away Women’s Reproductive Rights This Year?