By Land or by Sea, Immigrants Find Their Way to America 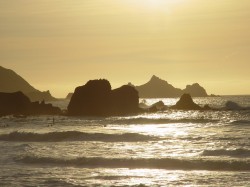 With all the talk about the porous border with Mexico, you’d think we only had a southern border, and that to the north the country tapers off into nothing but thin air. Isn’t that funny? But what you hear even less about are our borders to the east and west — yes, I’m talking about the ocean.

The AP reports that more and more people from south of the border seeking to make a life in America are eschewing the heat of the desert and trying a wetter mode of travel, making their journey through the Pacific Ocean to come ashore on the west coast. Though unauthorized immigration by sea has picked up for those hailing from Latin America due to increased security along the Mexican land border, it’s hardly a brand new phenomenon. After all, if you live on an island, the only way to leave is by water or by air, and many Cubans, and more recently, Haitians, have washed up on our eastern shores. (It’s not called “wet foot, dry foot” policy for nothing.) Sea voyages on this particular route have been popular since Prohibition times, which have some striking similarities to today’s immigration law.

Crossing by sea requires the aid of a smuggler, and it costs about twice as much as the typical land smuggling, to the tune of $5000 for a rocky trip on a small, old boat. Too bad all that cash is going to smugglers rather than, say, to the U.S. for fees to legally immigrate through official channels because we refuse to loosen overly strict restrictions on how many people can enter from Mexico. Immigrating without authorization by land or by sea might be difficult and dangerous, but it’s still for most people more likely to succeed than an attempt to immigrate within the inflexible system, even if you’re trying to join family.

Only two immigrants are known to have died attempting the journey to America by water [recently by this western route], compared to hundreds who’ve passed away in the desert, but as the ocean holds many secrets. Even in the desert along the Mexican border, there are many undiscovered bodies, and we don’t really know how many hopeful immigrants might have been lost at sea, or will be if it continues to become a more attractive means of coming to America.

Building a fence, popular nativist talking point that it is, won’t solve the issue of unauthorized immigration by boat, even if it could (as is unlikely) stop all entry through the desert. Simply declaring immigration to be illegal won’t stop smuggling of people any more than calling alcohol illegal stopped the hard stuff from finding its way to the United States. Sometimes, you just have to accept that a law needs changing.

Comments Off on By Land or by Sea, Immigrants Find Their Way to America