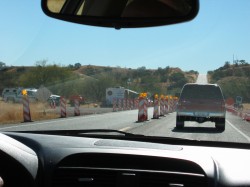 In the United States, abortion is supposedly legal, despite state restrictions that infringe upon the time and manner in which the procedure can be performed. In Mexico, the country makes no bones about abortion being illegal, with Mexico City the one small exception to the rule. Yet Laura Tillman reports at The Nation that American women are crossing the border into Mexico to address unwanted pregnancies. What gives?

While Roe v. Wade protects American women’s right to an abortion only up to a point. Even during the first trimester when an elective abortion is legal for any reason, many women find that the procedure is inaccessible. Cost is a major factor: just a few days ago, I wrote about low-income women resorting to do-it-yourself abortions due to the prohibitive expense of a legal medical procedure that is nonetheless kept out of all public and some private insurance coverage. Other factors, which vary on a state-by-state basis, include a lack of abortion providers in the area, 24-hour waiting periods, restrictions on how far along the pregnancy can be, parental consent, and stigma.

In Mexico, on the other hand, though abortion is illegal, the Guttmacher Institute reports that the abortion rate there is actually 40% higher than in the U.S. It turns out that for women in America who live near the southern border, heading down to Mexico to buy a cheap bottle of “abortion pills,” usually Misoprostal, can at times look like a better option. And if you need to resort to getting an abortion without a doctor’s care, using Misoprostal to induce a miscarriage is a less dangerous option than many other forms of illegal back-alley or do-it-yourself procedures — although it still carries significant dangers such as internal bleeding or birth defects should the fetus end up being carried to term.

Tillman’s article takes a peek at another fascinating reason why using a pill like Misoprostal might be preferable to going to a clinic for an abortion: women who have been brought up to believe that abortion is wrong can convince themselves that when they miscarry from a pill, it’s not really an abortion. Diana, a 30-year-old single mother of two, rationalizes that, yes, she took the pill with the desire of inducing a miscarriage/abortion, but she doesn’t know for sure that the pills caused her miscarriage and it didn’t just happen naturally. Since “abortionists” removing a fetus are demonized by opponents of legal abortion, taking a pill in private and later undergoing a miscarriage can seem less at odds with a woman’s religious upbringing.

A miscarriage, of course, is just a spontaneous abortion. This fastidiousness about language doesn’t alter what’s occurring; the intention in taking that pill is the same as when a woman walks into a reproductive health clinic to have an abortion, and, if all goes as desired, the outcome is the same. Given that illicit use of a pill like Misoprostal is more dangerous than a legal abortion from a doctor, women shouldn’t be driven to jeopardize their health and lives for the false comfort of a tactic that doesn’t look quite like the devil they’ve been taught to abhor.