DHS Gets Priorities Straight on Deportation 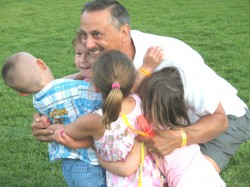 The United States immigration system suffers from a record backlog, with about a quarter of a million cases awaiting hearing. In the most bogged down places in the country, detainees can wait up to three years for a deportation hearing. That’s three years in prison for people who, remember, haven’t been convicted of any crime. Not even an administrative immigration violation: undocumented immigrants are pressured to sign voluntary deportation forms so they can be shipped off immediately, so the people waiting in detention for a court hearing are those who want to contest their removal. They are only suspected of being undocumented immigrants. And yes, we do make mistakes, even detaining American citizens.

Whether or not these detainees end up winning their cases and being allowed to stay in the U.S., they’ve had up to three years of their lives and freedom stolen away. Immigration and Customs Enforcement (ICE) has been notoriously stubborn on switching to humane (and less expensive) alternatives to detention, such as ankle monitoring bracelets, which would let people without serious criminal records go about their lives as they wait and wait for their hearing. Meanwhile, the detention system sucks in $1.7 billion of taxpayers money in a waste one judge called “mind-boggling,” but lines the pockets (and lobbyists’ pockets) of private prison contractors such as The GEO Group, Inc. and Arizona Gov. Jan Brewer’s friends at the Corrections Corporation of America (CCA).

Finally, the Department of Homeland Security (DHS) is doing something about this inhumane system and money pit by moving to dismiss the cases against suspected undocumented immigrants who don’t have a serious criminal record. The Houston Chronicle reports that ICE spokesman Richard Rocha states that this is to enable them to focus on those undocumented immigrants who do have a criminal background and might endanger public safety or national security.

This is a refreshing move after the leak of a memo detailing pressures on immigration agents to meet quotas on detaining non-criminal undocumented immigrants, which incentivizes law enforcement to snatch the easy guppies of hard-working, minding-their-own-business immigrants rather than going after the sharks that nobody wants swimming in our ocean. We have limited resources and funds to pour into rooting out, detaining, and trying undocumented gardeners and nannies, while succumbing to this diversion lets serious problems like human and drug traffickers go along their merry way unmolested.

Though ICE Assistant Security John Morton said at the time of the quota memo’s leak that this was antithetical to their true policy of pursuing serious criminal offenders first and foremost, this dismissal of pending removal cases gives us an inkling that this might actually be more than just empty words.

Even better, immigration attorney Elizabeth Mendoza Macias says that many of her clients that have been released from detention and the charge of being in the country illegally can now pursue official legal status through means such as a U.S. citizen spouse or human trafficking victim’s visa — which makes you wonder what we were doing wasting our time and money locking up these people in the first place.

Comments Off on DHS Gets Priorities Straight on Deportation