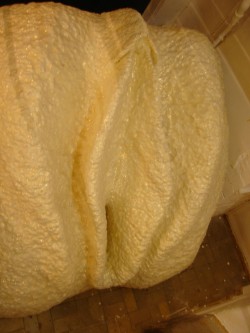 Female prisoners in Colorado are now forced to spread open their labia so that guards can peer into their genitals at close range. Does this strike anybody else as overkill?

Stephanie Hallett at Ms. Magazine’s blog reports that Colorado already had an invasive policy of “bend over, squat, spread and cough” for anal cavity searches, but this new addition takes the standard prisoner strip search to a new level of humiliation and violation. An estimated 80% of female prisoners have a history of being sexually abused and some suffer from PTSD as a result, which means that flashbacks can be triggered by a practice that forces them to lift their labia and sometimes clitoral hoods so that a guard can leer in from inches away with a flashlight beam. Prisoners who have tried to refuse compliance have been threatened with pepper spray.

This extreme policy on strip searches for contraband makes me wonder just how much and how easy they think it is for a woman to stuff items in there. Colorado must have a really, really bad problem with contraband, and being searches those repeat offenders who simply can’t be trusted not to be especially devious, right? I mean, they wouldn’t needlessly do something tantamount to sexual assault, triggering PTSD and reducing women inmates to tears, right? Well, the ACLU and ACLU of Colorado, which are calling for an end to this policy, say that this “degrading, gratuitous and unconstitutional” search is being used in searches where guards have no suspicion that the prisoner is actually trying to hide contraband.

This kind of invasive search of a woman’s body is not necessary for the safety of the prison, does harm to women’s well-being (especially sexual assault survivors), and seems more intended to humiliate than anything else. Tell Ari Zavaras, Executive Director of the Colorado Department of Corrections, to rescind the degrading new policy immediately.