Kelly and Antoine Dodson and the Bed Intruder Song 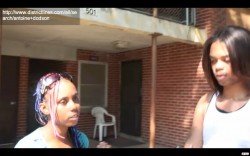 Antoine Dodson became an internet sensation after voicing his anger over the attempted rape of his sister Kelly, a rant that was remixed into the “Bed Intruder Song.” The song, which has been deemed hilarious by the internet masses and received over 12 million views on YouTube, was sold on iTunes, where it raised enough money to allow the Dodson family to move out of their home in the projects to a better neighborhood.

But while that seems like a happy ending, bloggers like Tamara Winfrey Harris on Race in America want to know: “What’s So Funny About Antoine Dodson?” Harris writes, “Part of the Dodson meme is, I fear, about laughing at mannerisms that the mainstream associates with blackness, gayness and poverty. There is nothing amusing about a young woman assaulted in her home. And so, I worry that people are laughing at Antoine: his flamboyance and perceived gayness; his use of black colloquialisms, like ‘run tell dat,’ his grammar and accent.”

In an updated YouTube video, Antoine and Kelly thank the people who helped them make this change through their financial support, while Kelly tries to explain that, well, she can’t explain what she’s feeling as a sexual assault survivor. She refers to her fears and those of her two-year-old daughter, and how the attempted rape has had a huge impact on her family. If Antoine hadn’t heard the intruder and intervened, Kelly would have been raped, or, she fears, even killed. This is something that gets lost when people are laughing over Antoine’s rant-turned-rap, and though Kelly now expresses gratitude that the song help provide a better life for her family, she still complained, “I was very upset about it because they were taking it as a joke and I was feeling like they were not looking at the part where I was the victim.”

In some ways, the Bed Intruder Song and the popularity Antoine Dodson has received because of it has a very positive outcome. Financial support for the individual traumatized and widespread attention for the issue of sexual violence, one that rarely gets the kind of coverage it deserves. But, unfortunately, the money comes at a certain cost, because it also seems to trivialize the assault.

Antoine stood up against the rapist in a way we rarely see: he was loud, he was angry, and he didn’t make excuses. Rape is too often swept under the rug, and Antoine didn’t do that. It’s hard to parse out how many viewers are simply laughing at Dodson, as Harris fears, and how many appreciate the message he is sending standing up to decry violence against women. I like the Antoine Dodson “Bed Intruder Song” too. I like it because he tells the rapist, you were wrong and you’re going to be caught, and I and my sister and my family are stronger than you.

The song remix is unavoidably catchy and made to be humorous, but it’s also an empowering in-your-face statement against perpetrators that it’s refreshing to hear. Maybe most people don’t hear that when they’re listening, and it would be great if those millions of viewers could also be convinced to visit an anti-sexual violence site like RAINN. However, this is still a song that’s firmly anti-rape, so I think there has to be some benefit to its popularity.