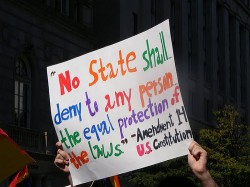 Running high on his victory in passing SB 1070, Pearce is thinking big. His next target becomes clear in a series of emails (pdf): the citizen children of undocumented immigrants. His goal: deny birth certificates to American-born babies who cannot prove they have at least one U.S. citizen parent, so that when Arizona law enforcement comes around demanding, “papers, please,” they won’t be able to demonstrate that they are American, born and raised. While he and his friends refer to these infants as “anchor babies,” that’s nothing but nativist, xenophobic, racist code for “American-born citizen children (that we don’t want).”

And as Amie Newman points out on RH Reality Check, there is a huge dose of sexism and misogyny mixed in with this anti-immigrant rhetoric. One email, which Pearce says he agrees with, reads, “If we are going to have an effect on the anchor baby racket, we need to target the mother. Call it sexist, but that’s the way nature made it. Men don’t drop anchor babies, illegal alien mothers do.” Okay, I’ll call it: referring to pregnant women in labor as dropping anchor babies is sexist.

Pearce’s correspondent, concerned about the expense of DNA tests to prove paternity in court and opening that “can of worms,” further suggests: “if the woman is illegally here, so is her baby. I also think the mandate should be retrogressive. End of story.” Hmm … perhaps fathers’ rights activists should also be especially concerned about Pearce’s plan. How would you feel if your American-born child was deported, even though you’re an American citizen?

Since the passage of the 14th Amendment in 1868 extending automatic birth citizenship to all those within U.S. borders and turning back the legacy of slavery, the fact that if you’re born here, you’re an American, has been an important part of the American ethic. (There is a narrow exception to birthright citizenship today for the children of foreign diplomats and prisoners of war, because they not subject to the laws of the United States.) Pearce’s preference for returning to slave times is as disturbing as it is unconstitutional. Since Arizona thinks reading is fun, they might try reading the 14th Amendment: “No State shall make or enforce any law which shall abridge the privileges or immunities of citizens of the United States.”

It makes you wonder why a senator in a state like Arizona, which claims to be so concerned about border security and crime, has nothing better to do with his time than target babies. Ironically, while immigrant rights activists are pushing for the passage of the DREAM Act, which would provide a pathway to citizenship for undocumented students who have spent most of their lives in the United States and are American at heart, Peace and his ilk are attempting to find ways to undermine the Fourteenth Amendment and criminalize babies.

If Pearce gets his way, somebody who has never stepped foot outside of the borders of the U.S. of A. their entire life could still be deported to a strange land.

Stop Sen. Pearce from criminalizing babies and attacking the constitutional rights of American citizens by signing this petition.