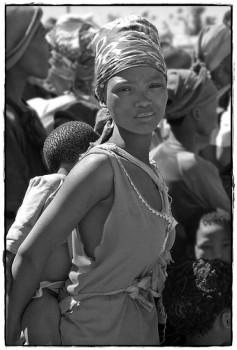 Michael A. Jones calls attention on the Human Rights blog to the abhorrent practice of sterilizing women in Namibia who are HIV-positive. Over the past 10 years or more, hundreds of women in Namibia have been sterilized against their will in an illegal yet widespread practice.

Whenever an HIV-positive woman walks into a hospital in Namibia, should could end up walking out without the ability to give children. In some cases, the forced sterilization occurs without their knowledge while they are undergoing another surgery; in other cases, women are tricked or coerced into signing consent forms under duress. Jones reports that a 31-year-old pregnant woman arrived at the hospital to give birth, where she was told that unless she submitted to sterilization, she would have to deliver her baby on her own, without medical attention. What a choice to be forced to make.

The Namibian government is now going to be facing a number of lawsuits from various organizations challenging this violation of women’s reproductive and human rights guaranteed by both the country’s constitution and international law. These groups further allege in their lawsuits that the practice increases discrimination against HIV-positive persons, and that the procedure itself is unnecessarily dangerous.

Sign this petition, started by the Namibia Women’s Health Network, to tell the Namibian Health Ministry to stop the forced sterilization of women. This violation of women’s bodies and reproductive rights cannot be allowed to continue.

Comments Off on Stop the Forced Sterilization of Namibian Women